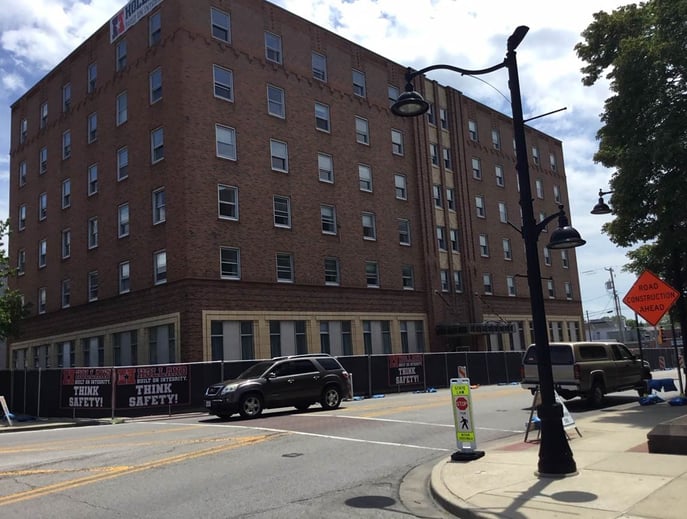 Rebirth of an old legend is underway in Belleville, with Holland Construction Services guiding the effort.

Holland is serving as general contractor in restoring the former Meredith Home, long known as Hotel Belleville, and will be turning it into a $9.25 million apartment project known as The Lofts on the Square.

Tim Simon, the senior project manager for Holland, describes the project as a gut-rehab-renovation to most of the interior of the six-story building on the Belleville Square. The exterior facade, common spaces, corridors and existing unit doors are being retained for historic preservation.

“Besides the historical corridors in dwelling levels on floors two through six, everything else is gutted and put back,” he said. “All mechanical, electrical, plumbing, fire protection, and voice data is all new going back in.”

From the outside not a lot is going to change. The brick will be cleaned and tuckpointed. Old windows will be removed and replica, energy efficient windows installed. They will give the same appearance as the old.

Changes inside the rooms will reflect modern conveniences, Simon said. Some 47 units are planned.

The work began May 1. The first phase included asbestos abatement, lead removal and mold remediation, along with selective demolition, which is just wrapping up. Now, framing along with mechanical, electrical, plumbing and fire protection rough-ins, from the top floor down, is underway. The completion date is set for July 2021.

The building features all structural steel.

“The brick (three wythe wide) is not what supports the structure. It’s the wide-flange beams and columns. And there are a lot of those on every floor, so the challenge there is routing of our mechanical, electrical and plumbing around the columns and making it fit to the architect’s design with the unit layouts.”

The new living units will be slightly larger than what existed.

Floors two through six are “almost mirrors of each other,” he said. The first floor will consist of a lobby/lounge area, library, community room, computer room, mail room as well as retail space accessible from the sidewalks on the square.

In the basement level will be a fitness center and tenant storage area.

Hotel Belleville has been vacant for several years. The 120-room Art Deco complex was considered a world-class facility when it opened in 1931. It ceased operations in 1961 and in 1962 was purchased by the Catholic Diocese of Belleville for use as a retirement home. The Diocese closed it in 2010. The city of Belleville purchased it shortly after its closing in order to have some control over what happened to it. The building was added to the state’s historically endangered list several years ago.

In 2016, answering a request for proposals from the city, Bywater Development Group of St. Louis and Southwestern Illinois Development Authority partnered on a deal and won the right to redevelop the historic structure. SWIDA is a state-authorized bonding agency that helps local developers with financing.