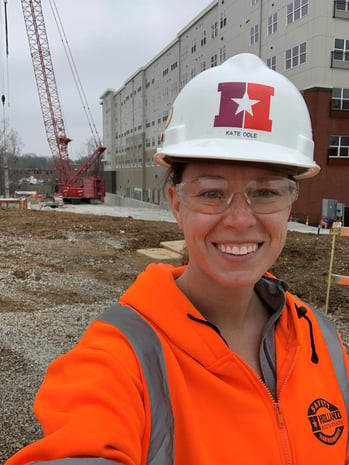 I recently read a blog about women in the construction industry and how they are making an impact (www.constructconnect.com/blog/the-state-of-women-in-the-construction-industry-in-2020). I really enjoy reading these kind of articles. In the almost 6 years I have worked in construction, I can definitely tell a difference in the numbers. When I first started, I was the only female in my position at the company I worked for as well as on the jobsite except for the final clean crew -- today working for Holland at the Whispering Heights project site we have women working in various trades. I also see women from my area of Illinois graduating high school and college and going into apprentice programs for operating engineers, electricians and ironworkers—it’s a great thing to see!

This even expands to the design portion of our industry: I went to SIUC for architecture and our graduating class had one of the largest numbers of females than previous classes (most women typically went into interior design). In our class, I befriended three other women and of the four of us, three went into construction—kind of wild right? We all are seeing an increase in women in construction whether it be engineering, design, construction management or trades and I think a lot of it has to do with how easily young people can find information on different career paths and when young women see another woman doing a ‘non-traditional’ job it allows them to more easily think “hey, that could be me”. This industry also hasn’t been a hot topic until more recently because there was such a push to go to college but now other areas like law and healthcare which were the top choices are oversaturated and people have an alarming amount of student debt—so graduating high school and going into a trade and starting to make money right away sounds better and better to this next generation.

The last items I want to touch on are the wages and acceptance—I mentioned before that 3 of the 4 of our friend group went into construction, well, all three of us started at companies who had members of their teams rooted in a more ‘old school’ mentality, one where women were hired for diversity reasons, not to be grown and taught more to move up in their careers. When I was hired at my previous company, I was definitely low-balled on my salary but it was my first job and I had no experience so I accepted and figured if I worked my ass off it would pay off in the end—so for three and a half years I worked late, took on more and more to prove myself, ran projects on my own and even worked out of state to get more exposure and be a better Assistant PM/Future PM. Well, as many people as I had advocating for me, when someone or certain people in leadership see you as nothing more than a woman in a man’s world (or reads ‘Assistant PM’ as ‘Assistant TO THE PM’), there was less opportunity for me to earn more than a 3% raise or be given a salary that I really deserved. After I gave my two weeks, I found out that an intern was offered just under what I was making at the time to come aboard full time—as if I hadn’t already solidified my decision, that was the final nail in the coffin. All three of us in our friend group have changed companies and each of our new companies has a culture that supports women in this world and wants to grow them. We have competitive wages, know we are valued and have a better work/life balance. Perhaps it is being young and naïve and we all have to go through the trenches to realize what we are worth and what we really bring to the table, by my hope is that less women have that experience and more start out at companies that will support, teach and inspire women to not only challenge themselves but also recognize the value they bring to the table.

Holland is a different kind of construction company. Since 1986, we’ve been providing a full range of high-quality and personalized construction services throughout southern and central Illinois and the St. Louis region. Our foundation is built upon integrity, establishing relationships, and getting the job done right.